It seems there would be no hiding place for the dreaded BokoHaram terrorists this new year, as the government of Republic of Chad, has patronize an indgeneous company which manufactures tactical military weapons in Nigeria, in order to enhance the fight against insurgency in their country.

To this end, as the fight against insurgency continues, it has been gathered that the Chad Republic has placed an order for 100 units of Mine Resistant Ambush-Protected vehicle built by a Nigerian, Ade Ogundeyin, whose company is located in Ogun state.

The Mine Resistant Ambush-Protected vehicle is capable of protecting it occupants in case the vehicle lands on mines planted by the enemies while going to the warfont.

Consequently, in his reactions, the veteran journalist Babajide Otitoju, revealed that the company came to the know of many people after he did a story concerning the company on one of its Journalist Hangout programme, last year.

Babajide said, “Though our country is not quite where it ought to be, there are many positive things happening in Nigeria.”

In his words, he said:

“Chad Republic placed an order for 100 units of the Mine Resistant Ambush-Protected vehicle built by a Nigerian, Ade Ogundeyin. The company is based in Ode Remo, Ogun State.”

“After I did the story many journalists, including those based in Ogun State told me they never knew such a big company making tactical military weapons was there.

Though our country is not quite where it ought to be, there are many positive things happening in Nigeria. You’ve got to seek knowledge, explore our country, discover things hidden, travel out of your comfort zones, take a few risks, to know a lot more about our country. He added. 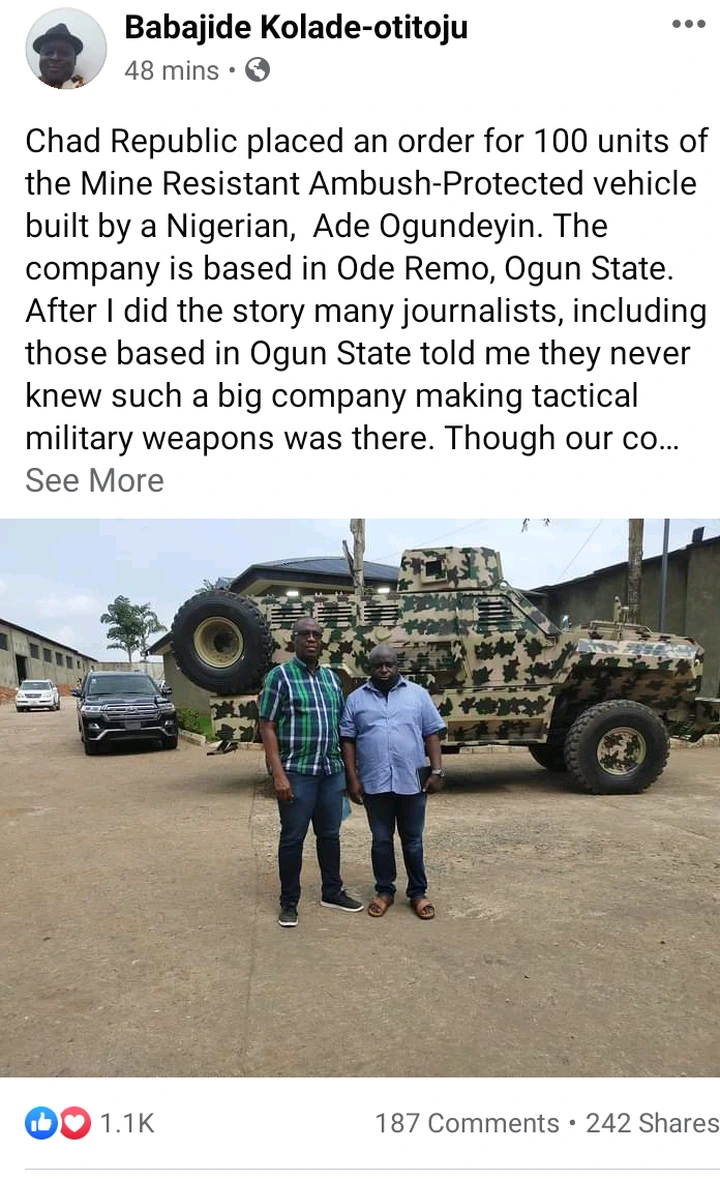 Consequently, diverse reactions have continued to trail the development,as many urged the Nigerian military and the Federal government to maximize the potential in the country to crush out the dreaded BokoHaram terrorists that has continued to put sorrows in the lives of many people in the North.

However, in your view, do you think our government is doing enough to put an end to this incessant attacks by the dreaded BokoHaram terrorists ?

Top 6 Benefits of Tea Tree Oil for Skin
Why Am I Losing Hair Suddenly? 10 Possible Reasons
To Top